Is There More to Life… Professional Book Review 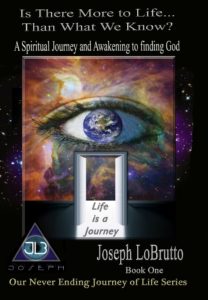 Is There More to Life than What We Know: A Spiritual Journey and Awakening to Finding God is an intriguing blend of New Age philosophy and Christianity. It is a personal account of the blessings that come with the pairing of powerful insight and a firm belief in a higher power. The author Joseph LoBrutto III does not view his gifts as separate from his faith.
The story begins with the development of author Joseph LoBrutto’s spiritual gifts. LoBrutto is a psychic-medium who practices in Florida. In the book, the author discusses his journey as a psychic through childhood visions to his current work as a medium who connects the living with the deceased. Throughout his story, LoBrutto honors the presence of God in his abilities and his work.

“My childhood visions were a common occurrence for me (page1).” The author’s early visions included a Native American and an Irishman. He learned from his mother that both his maternal great-grand mother and uncle were psychics. While no work towards nurturing his skills occurred during his childhood, the gifts did not leave him. In fact, as LoBrutto grew older his interest in his abilities increased. The author describes the courses he took to develop his skills while also managing the everyday difficulties of life.
Through his classes, LoBrutto learns that he is not only a psychic-medium, but also a trance channel, that is “a person who goes into a trance and a spirit entity merges with that person’s body and soul (page11).” The author is the channel of a spiritual Collective that includes the Ancient One, Indigo, Genevieve, Patrick, and Sparrow Hawk.
LoBrutto views his psychic and channeling abilities as gifts from God. The spirits he channels have informed LoBrutto that he is a reporter for Christ currently and in his former lives. In the book, an example of the author’s reportage includes the story of Jesus with a metaphysical slant.

LoBrutto encounters many spirits during his time of study. One in particular is Genevieve who speaks about relationships: “You do experience growth in a relationship; each person you are tied to gives you a new lesson in life and you must have this karmic lesson to grow in life (page102).”
Obviously, this not a typical memoir: LoBrutto is open and brave and honest in sharing these amazing happenings in his life. While there is often some disbelief and even a sense of the ominous associated with psychic abilities, LoBrutto’s approach to explaining the various parts of metaphysical science includes the primary message of love and brotherhood that is the cornerstone of Christianity.
Melissa Levine
for Independent Professional Book Reviewers
www.bookreviewers.org…