Joseph is a miracle worker 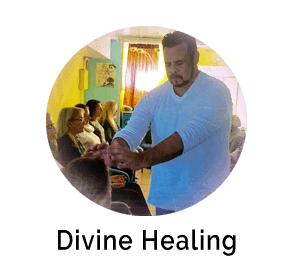 I went to one of his healing seminars with two friends of mine. One of my friends was going through a very hard time in her life. I feel like I was meant to bring her to Joseph. She had just recently went through a breakup of almost 9 years. He kicked her out with her stuff and no where to go, except friends couches. Joseph told her that the next love she will find with be the one, and she will be happier than she has been in a very long time. He also told her the best thing she could of heard, her father was with her.

About a month later she met a guy at her new job, and at first she was not into him (but long story short) she is so happy. She moved into a place of her own, for the first time ever and now they are making arrangements for him to move in. She can’t stop smiling, and misses him every time they are apart. We know this was Joseph healing her heart so she could find love.
On top of my friend being healed, I asked Joseph to help me so I can quit smoking. I was a pack a day smoker for the past 10 years. I have tried everything from Chantix, Nicorette, and every other possible thing on the market. After Joseph healed me, I didn’t stop right away. But I finally had the strength about a month later to stop smoking. I went a bought one of those e-cigarettes. I have now been tobacco free since January 5, 2014. I started at 18mg of nicotine and as of today 3/21/2014 I am at 3mg. Joseph is a miracle worker.

I just recently went to Joseph for a private reading as a birthday gift, that I asked everyone to get me. The next day I was happier, full of energy and that is the day I went down to 3mg. The people at the smoke shop can’t believe I have cut back so fast. I owe it all to Joseph and the collectives. While at the reading, I got Joseph’s book. I have not been able to put it down. I want to read it non-stop. I want to learn more and more. He is amazing and I believe his gifts are real. Thank you Joseph, you are amazing.
Marissa…