My Sacred Journey Through Mexico 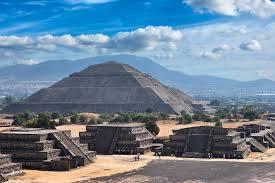 The last day of my trip ended at Peña de Bernal located in San Sebastián Bernal, a small town in the Mexican state of Querétaro. But before I share this story I would like to recap my whole journey that I compare to an Indiana Jones Adventure.

It started like the beginning of the Raiders of the Lost Ark, when I had the privilege to meet with the indigenous people of the Teotihuacan nation and learn about the true history of the Mayan culture through their shamans who are known as The Guardians. They informed me of the secrets of the Pyramids of the Sun and what lies in its secret chambers. We did not go inside the chambers, but I imagined myself as Indiana Jones searching the pyramid chambers for ancient artifacts. Lol…

The following day we headed to Mexico City in search of the Crystal Skull ( Another Indiana Jones Movie). I met with the Collector and his wife as he explained how the skull came into his possession. The energy of the skull was very intense as it drawn me into a trance as I glazed into the eyes of the skull. I was honored to have this rare opportunity to hold the Crystal Skull and feel the vibration it holds.

After leaving Mexico City we traveled to the Mountain City of Tepoztlan to meet with Carlos Diaz, who is known to capture real footage of Ufos, that Nasa claims where real. We spent the night in Tepoztlan in the hopes that we just could just get a glimpse of what Carlos had captured on camera, but bad weather rolled in as we can only watch lightning hit the mountain top as it was an end to this adventure.

A documented fact that over 50 % of the population of the city of Tepoztlan, in which Diaz lives, making about 12.000 people, saw the very same type of object filmed and photographed by Diaz, a fact confirmed by the mayor of Tepoztlan. The Air Traffic Controllers of Mexico City’s International Airport confirmed on camera regular UFO sightings over the area of Tepoztlan. Several researchers who visited the place, including Dr. Roberto Pinotti, saw the very same ship Carlos filmed and photographed.
According to Carlos Diaz, “the aliens” are living among us for thousands of years. They live there as normal Mexicans, drive cars live in a house and watch tv. So the next unfamiliar Mexican you meet in Tepoztlan might be an ET. Lol…

The very next morning we prepared for a four hour trek across Mexico to the Peña de Berna. ( See Photos) This porphyry-tic monolith (Rock) was formed some 100 million years ago during the Jurassic period, when it must have been at least three times higher than today. We were to meet with a Carlos Martinez who was know in the area as the proctor of the Peña. He informed us that the Peña de Berna holds the Akashic Records of the Earth.

He also informed us that the Peña is guarded by the guardians and only through their permission may we learn the secrets that is holds. He brought us to the base of the Peña calling it the entrance to the portal to enter the Peña. Again just like an Indiana Jones movie, this time “The Last Crusades “in front of the portal was a castle wall with Knights guarding it.

At this portal Carlos worked with each one of us energy, and after working on me he informed me that my third eye was wide opened, that I had many lifetimes as being psychic that my next life time I will come back as an indigenous shaman, in Africa. He said the more enlighten you become the simpler life becomes. The next stop was a second portal located in an abandoned house that was filled with ruff quartz crystals. Here is where we must meditate and if we are permitted by the guardians to enter the Peña it will be given to use in a vision. As we began to meditate the skies then opened as the rain pounded the metal roof. As the pounding got louder it helped me to slip into a trance. Then in my third eye I saw a wall opening up to the Peña.

White quart crystals lined with gold filled the walls, ceiling and floor. A bearded man with the look of Father Time motioned me to enter. He led me to a huge tree that held leaves of green and gold thats branches went on for miles. I was told that the tree is the Tree Of Life and hold the Akasihc Records of the Earth. He then directed me to another corridor and to my surprise a young girl was sitting there covered with the leaves from the Tree of Life. She introduce herself as Mother Earth, but wanted me to see her in her infancy when the earth came into existence.

I shared my story with the group and Carlos informed that we where granted permission to climb the Peña in the morning. One last portal for we must see tonight he informed us. it is was located by the tourist area of the Peña. As we trekked up the man made walkway there was chair laid out stadium style for visitors to gaze up at the mountain. Now this wasn’t just to look at the beauty of the mountain but to look for UFOs. Music of Close Encounters, The Last Jet fighter, Star Wars played through loud speakers as I passed huts of merchants selling souvenirs. As we sat up high over the spectator on the Peña an unusually cloud formation appeared and Carlos said those where ships.

The Next Morning we drove halfway up the Peña until the road ended. Now we must hike it to the top. Carols showed us artifacts ( See Photos) as we hiked up the trail. As we drew close to the Peña rock side Carols pointed out an ancient drawing painted on the Peña walls.. He then said we are where we need to be and the guardians ask Joseph to channel their words to the group.Talk about being put on the spot lol…

Carlos had two crystal skulls that where in his back pack and he placed one by my feet and had me hold one on my lap. Within minutes i felt myself slipping into trance as the words of an indigenous channeled through me. He taught about how the earth came to be, its plant life, animals and humans.So much information came through about the star beings that came to this planet.. It was intense for me that my feet felt numb after i came out of my trance. See below for the live channeling video.

So this was my Incredible Sacred Journey in Mexico, Next will be Peru.